The first session of the 24 Heures Motonautiques de Rouen took off this morning at 10.00.

Team Abu Dhabi made a solid start as reigning F1H2O World Champion Shaun Torrente grabbed the lead with 72 laps completed in front of thousands of spectators lining the banks of the River Seine, Torrente had powered Team Abu Dhabi 35 into a lead of 1:07 over Team Nollet 2 spearheaded by Konstantin Ustinov.

After his first drive Torrente told us:

The first session was actually really nice, the nicest weather we’ve ever had, the water was fast. I led for most of the session and I made the fast lap at 1:19.998 and an overall of 72 laps in 1 hour and 40 minutes which is pretty incredible.  We had a small refuelling issue when we switched drivers the first time with Rashed Al Tayer so it has put us off sequence but if that’s the biggest problem we have it’s no problem at all.

A barrel-rolling accident forced Team Hafa (28) momentarily out of the competition, leaving Team Nollet (2) in the top spot for over 12 hours.

Further problems  for Team Abu Dhabi arose during the ninth hour when Rashed Al Qemzi had to drive his DAC back because of an overheating issue. The boat was promptly fixed in order to get back in the water and continue the race. 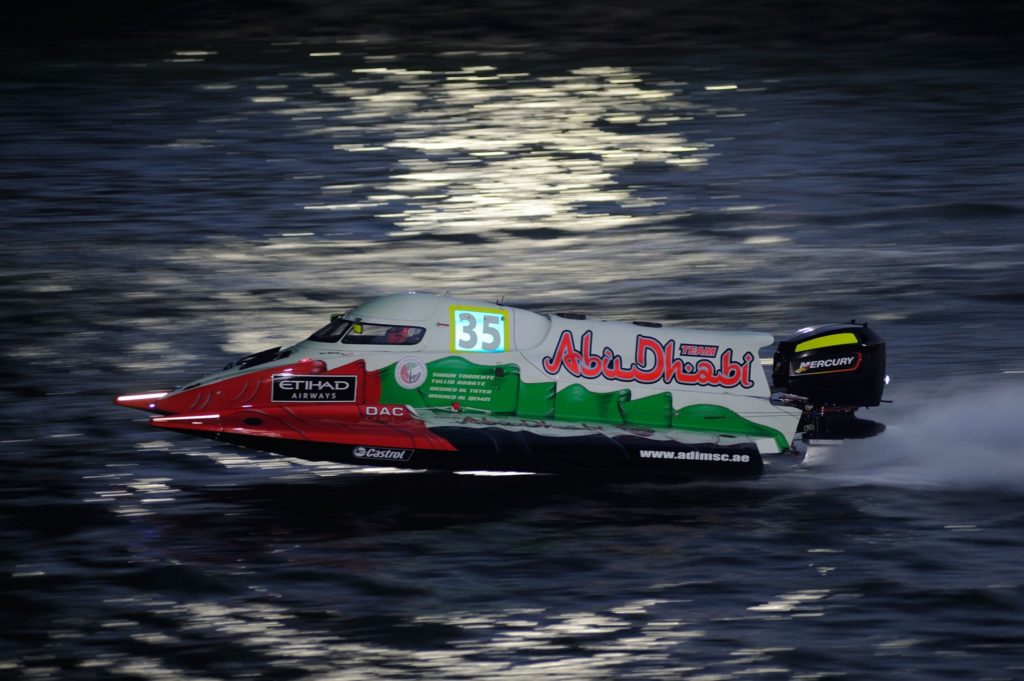 When Rashed came in the boat was having an overheating problem, something got stuck in the cooling system which overheated the compressor.  Since we had the boat here we went ahead and put on a new gear case and prepared all that we would have to stop for anyways. We did all these changes and then sent him back out.

The thrilling finale of  the first session started when Team Abu Dhabi began to close in on their rivals and a sterling fight back by the team enabled the DAC to finish session one in the first position. Team Nollet 2 was forced back in the second position with Team Abu Dhabi 36 rounding up the top 3.