Back in 1992 when I arrived in Chalon-sur-Soane at the UIM F1 Grand Prix of France, it suddenly dawned on me that making friends with as many drivers as quickly as possible would be the key to my success plus longevity as their official photographer.

So, when I was greeted with ‘awright Chrissy boy, how are you getting on’ my tough task began to feel achievable.

A personal tribute to my very good friend Andy Elliott who passed away peacefully this morning. 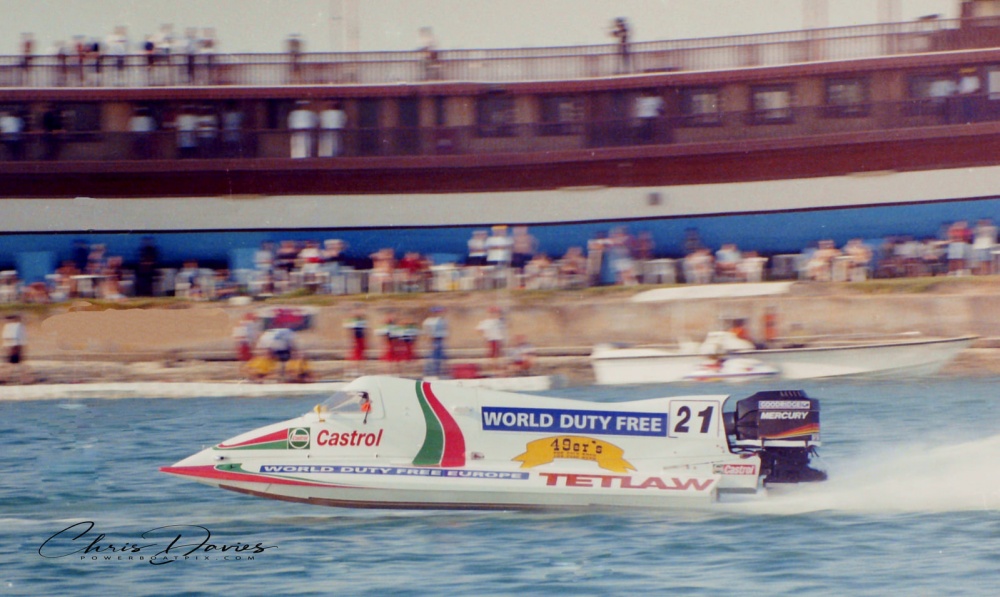 It was Andy Elliott that had asked the question, a racer I had photographed on a couple of occasions previously, usually when he was collecting an award at the London Boat Show.

I knew a bit about him, and I had often heard people say that he would be quick even if he’d been given a bath tub to race, after all he had won a World Championship in nearly every class he’d raced.

With Castrol International as one of my UIM F1 clients, Andy’s name was on my list of sponsored drivers and he would often ask for a couple of extra transparencies for his own sponsorship deals which I was happy to supply.

In exchange he offered me overnight accommodation at his house in Bracknell each time I flew out of Heathrow to a race somewhere.

On one such occasion he said rather than drive down to Chalon with Parky (David Parkinson), the UIM F1 Promoter, how about I went with him and Richard Wood, ‘it would be a laugh’ he said. Then about 1am in the morning we were on outskirts of Reims when Andy pulled over and said that him and Woody needed some kip and it was my turn to drive. 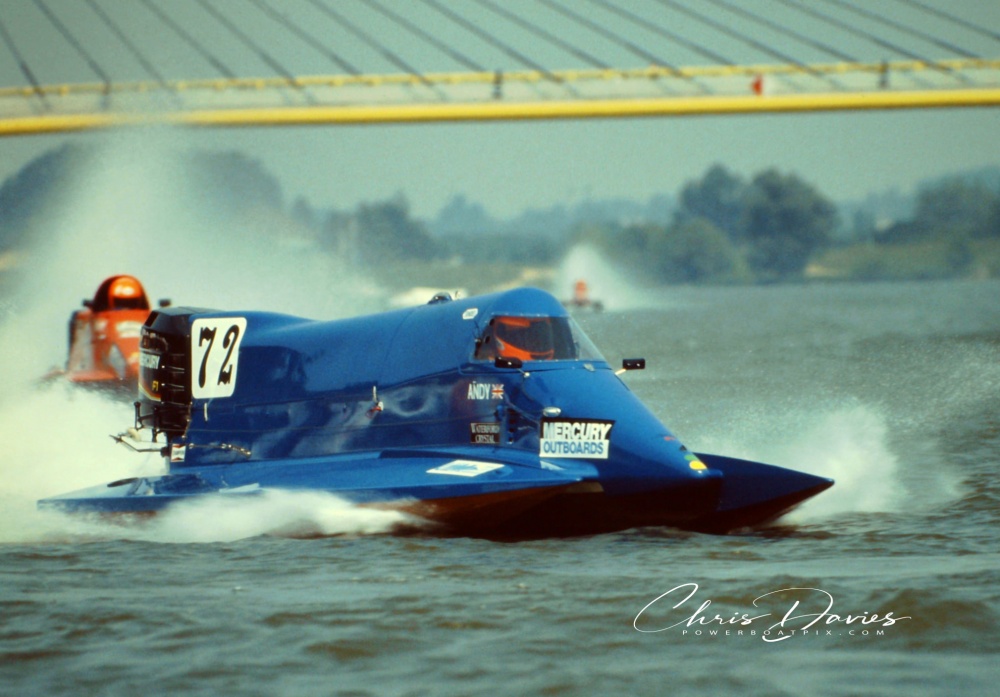 Andy Elliott racing at the 1992 French GP in Chalon-sur-Soane, my first F1 race.

Firstly, I had never driven abroad before and to make matters more entertaining for me we were towing Ron Koch’s Burgess raceboat, this certainly was going to be a totally new experience.

‘Don’t forget the overtaking lane is on the left, wake us up when you get to Dijon’ and with that he climbed over into the back seat and promptly fell asleep.

By the time we stopped for ‘petit dejeuner’ I’m not sure what was whiter, my face or my knuckles but we all survived.

A couple of years later we had become really good friends and at that time Andy was working in Windsor at a phone store owned by Carlos Maidana.

We were both due to fly out to Abu Dhabi the following morning for the season finale and he said pop along to the store to collect a spare house key.

As I was standing outside, I heard a voice say ‘Chris, what are you doing here?’ It turned out to be a former girl-friend of mine and when she heard that I was due to fly out to the UAE the following morning to go to a race it must have impressed her enough because she then invited me along to her local wine bar followed by an Indian at a nearby curry house.

The following morning, in typical Andy style, he announced that we just needed to collect some new sponsorship boat decals on route to Heathrow!

Even today I still have no idea how we made that BA flight; Andy certainly knew how to live by the seat of his pants.

As you can gather by now there was never a dull moment with Andy, he was the sort of guy who would be up for anything. 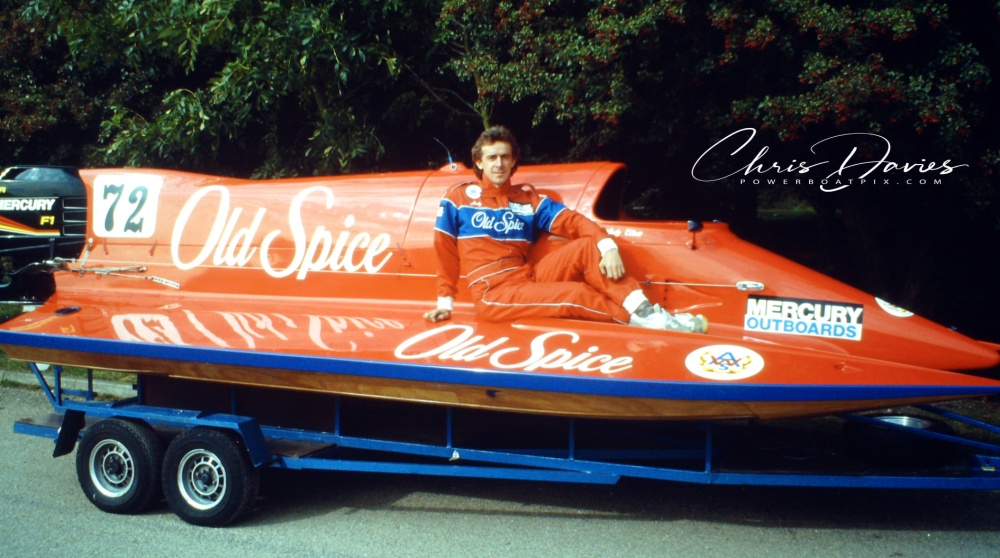 When we were in Pattaya for the Grand Prix of Thailand, Eric Michell from FMTV and I planned to give Andy a ‘special treat’ involving several ‘young ladies’ from the local area.

As Andy went back to his room for a quick shower, the first two ladies knocked on his door which he opened just wearing a towel and a broad smile. By the time Eric and I burst into his room from our hiding place along the corridor, Andy was surrounded on his bed by a very fine harem.

By this time, I had moved into a house just around the corner from Andy and we would often meet up at ‘Racquets’ the local sports club for nothing more strenuous than a coffee and a chat.

On one occasion Andy announced that Staples, the office supplies company were going to open a huge new store in Reading and that he was going to be involved with their promotion and could I help out?

Now I had visions of his raceboat with Staples branding all over it and him wearing a Staples branded Sparco race suit.

In fact, it turned out that his and mine involvement was actually just going around factory units in Reading asking for a business card for the person who brought their company stationery.

It felt like it could have been a story line from the tv series ‘Only Fools & Horses’ but if it meant he could go racing then that was all that mattered to the both of us.

One time when the UIM F2 World Championships took place in Épinay-sur-Seine in the northern suburbs of Paris we all meet up one night in a Chinese restaurant. When we tried to order food, the waiter couldn’t understand a word we were saying. In the end it was my then girlfriend, who I had bumped into back Windsor who saved the night by making various animal noises as we requested roast duck, chicken chow mein and beef with oyster sauce.

Later that night Andy said that it was about time that I made her ‘an honest women’. Unbeknown to him I had almost sealed the deal over a romantic meal for two half way up the Eifel Tower the previous night, only to lose my bottle at the crucial moment!

I did eventually get married to the young lady I bumped into outside the phone store and Andy always took great delight saying, ‘it wouldn’t have happened without his involvement’.

Then just over a year ago Andy and I took the train together down to Poole to attend the funeral of Raceboat International Editor/Publisher David Sewell who for many years had championed Andy’s cause. 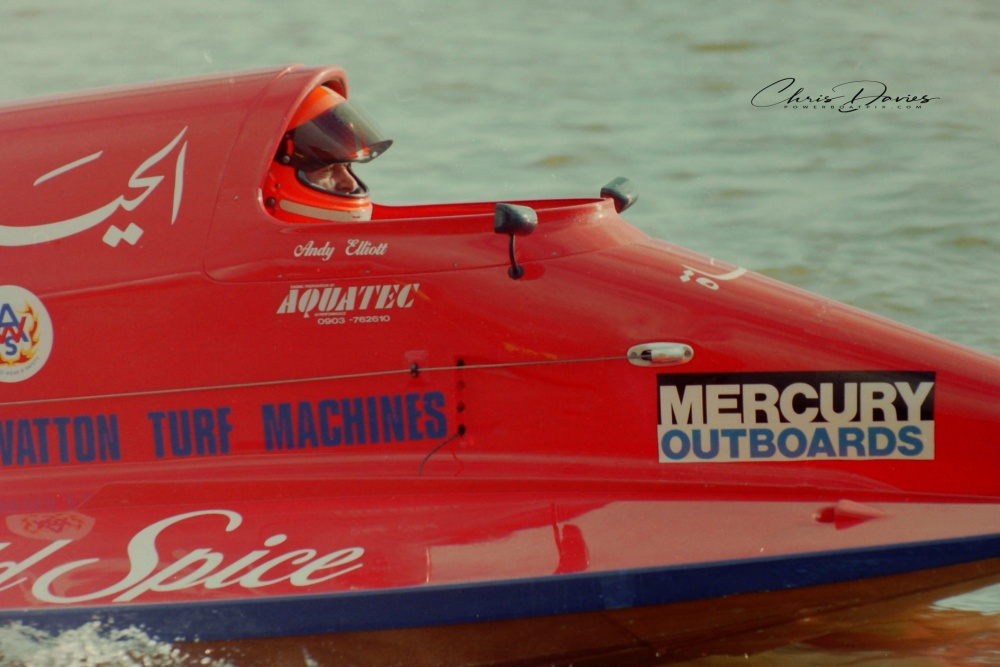 Andy in the Old Spice Burgess racing in Abu Dhabi.

Following the service, a few of us gathered on Poole Quay for some ‘lite’ refreshment. Sitting in the sun drinking way too much Stella, we both agreed that Dave had lived an eventful full on life and I suppose exactly the same could be said about Andy.

In a world of taciturn men, some taking themselves way too seriously and many appearing to have lost their ability to enjoy themselves Andy, with the smile of the eternal naughty schoolboy who was having fun rather than wilting under the gaze of the others, certainly had a different approach to live and that’s what we all loved about him.