Such is the case with Patrick Cleaveland, a native of St. Peters, MO and crew member for the Miss GEICO Racing Team.

As an adolescent, Cleaveland and his family spent summers in and around the waters in Lake Ozark, MO, he enjoyed watching some of the finest racers during the annual shootout and other lake events.

This is where he first realized his love for boating, and his affinity with boat racing.

He was enamored with boats and how they operated.

He wasn’t hired staff, but could often be found working the marina offering a hand to those seeking assistance in docking their boat. He was only there to check out the boats, but managed to collect some generous tips along the way.

During a summer vacation in Sarasota, FL, Cleaveland’s passion for boats and boat racing was fully realized when he proclaimed to his parents that he would one day work in boat racing.

At the age of 15 and with much conviction, he realized his “calling”, announced that he was someday going to work in racing, and began immersing himself in the industry.

After graduation from St. Dominic High School, Cleaveland started his career with MTI near St. Louis, MO., after just a couple of years in the shop, he decided to enroll in a certification program at Wyotech in Daytona, FL. 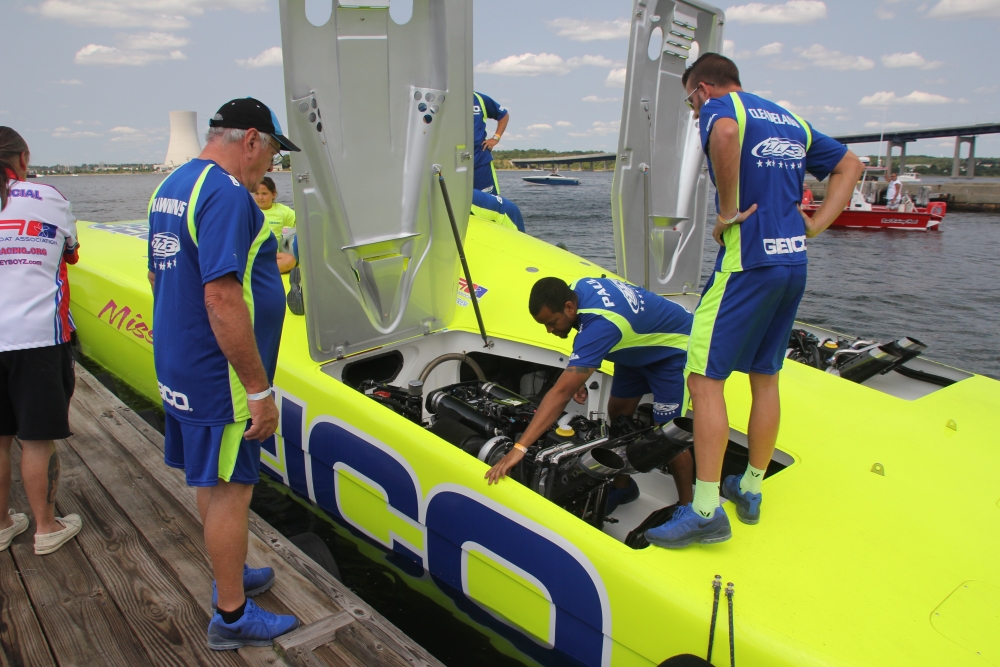 On his return to Missouri, his path crossed with a former St. Louis acquaintance, Gary Stray, he invited Cleaveland to visit the shop he managed in Riviera Beach, FL to check out the Miss GEICO program.

The 2019 Lake Race taking place this weekend is a homecoming for Cleaveland and his family, but Pat won’t be standing idly by waiting to assist a family with docking their boat and he’ll be actively working as a vital crew member for the Miss GEICO team.

The freshly painted and rebuilt Miss GEICO will compete in Class One International, which is comprised of the biggest and fastest race boats in the world.

Teams from Dubai, Australia, and Norway have come to race against America’s champion Miss GEICO.

All the boats in this class will weigh 12,000 pounds with identical race engines sealed and governed by Mercury Racing to insure fairness.

The 47′ Miss GEICO Victory catamaran is made of carbon, Kevlar and S-glass for high performance.

The boat sports a pair of brand new and recently released Mercury sealed 1,100 horsepower twin turbo engines and can reach top speeds of more than 160 mph.

On the water, Miss GEICO is under the control of driver James Sheppard and throttleman Steve Curtis.

The duo has been unbeatable the past two seasons and are aiming for a three-peat, collectively, these racers have earned numerous international, national, and world championship titles.

The second race of the Offshore Championship series takes place this Saturday, June 1.

Races will take place all day Saturday with Miss GEICO performing in the last race of the day at 4:00 PM followed by an awards party at 7:30 p.m.