Team Abu Dhabi’s Alex Carella was involved in a high-speed crash on lap 24 of Sunday’s Grand Prix of Harbin and was unable to extend his lead in the UIM F1 H2O World Championship at the Hulan Estuary Wetland Park course in north-eastern China.

The Italian collided with Baba’s Racing’s Filip Roms, while both drivers were duelling for second position in the 60-lap race, and their demise opened the door for pole position winner Sami Selio of Finland to take his first win of the season. Carella was taken to a local hospital for checks and medical attention. Team Sweden’s Jonas Andersson maintained second place after the restart and held it to the finish, while defending World Champion Philippe Chiappe rounded off the podium and moved 10 points ahead of Carella in the UIM F1 H2O Drivers’ Championship standings.

Shaun Torrente of Dubai’s Victory Team reached the chequered flag in fourth place to move into second position and three points in front of Carella in the rankings, as Team Abu Dhabi slipped behind Baba Racing and Victory Team and into fourth in the UIM Teams’ Championship that is led by the CTIC China Team.

Thani Al-Qamzi ran a subdued race by his standards in the second of the Team Abu Dhabi DACs and reached the chequered flag in 10th position, although he was later disqualified for not running in his designated lane at the start of the race.

Team Abu Dhabi’s Rashed Al-Qamzi and Mohammed Al-Mehairbi finished the second of the weekend’s UIM F$-S races in third and sixth place and that was sufficient for Al-Qamzi to leave Harbin with an impressive lead of 25 points in the championship standings. Team Sweden’s Magnus Sederholm avenged his defeat in the first of the Harbin races to the F1 Atlantic Team’s Jeremy Brisset to claim his first maximum points haul in race two.

“Rashed put in another impressive and consistent performance that places him in a really strong position in the UIM F4-S championship with six races to go in China and the UAE,” said Salem Al-Romaithi, assistant general manager of the Abu Dhabi International Marine Sports Club (ADIMSC). “It was a disappointing set back for Alex, but that is racing and these things can and do happen. We will regroup now and focus on the last three rounds of the championship. 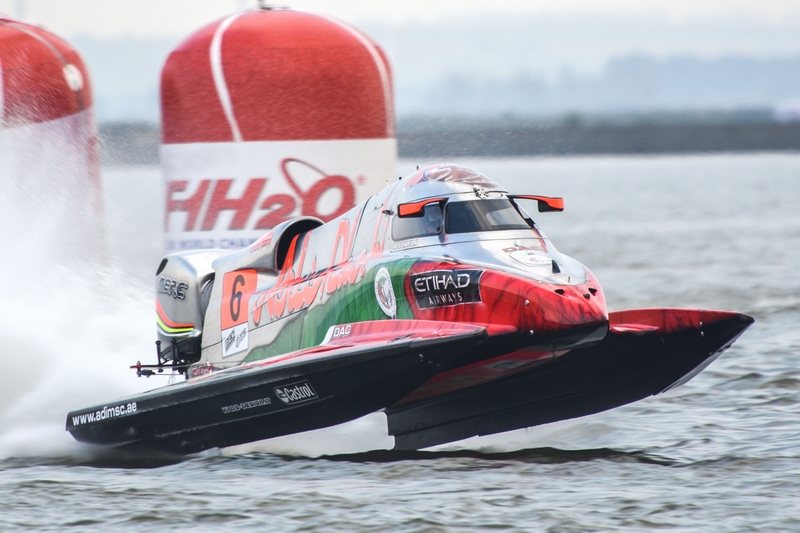 Carella and Al-Qamzi lined up for the start of the 60-lap race in fourth and ninth positions, although Selio, Roms and Andersson had the advantage of heading the Italian towards the first turn buoy. Title challenger Shaun Torrente endured a disappointing qualifying session to finish eighth in his Victory Team hull, but things went from bad to worse for the American, when he was forced to change his engine after the morning’s practice session and that dropped him to 16th at the start, two places behind defending World Champion Philippe Chiappe. Nadir bin Hendi was forced to sit out the race after Saturday’s BRM qualifying crash.

With his rivals a long way behind because of their respective engine and electrical gremlins and likely to face traffic at the start, it was imperative that Carella made a clean getaway after the green lights. Selio made an excellent start from pole position and retained his lead from Roms and Andersson, with Carella maintaining fourth through lap one, as Al-Qamzi moved up to seventh and Chiappe and Torrente stormed through to eighth and ninth positions.

Carella forced his way passed Andersson to snatch third on lap two and Chiappe overtook Al-Qamzi and climbed to seventh. He was soon followed through by Torrente, as Carella’s rivals for the title held seventh and eighth behind Selio, Roms, Carella, Andersson, Erik Stark and Ahmed Al-Hameli. Chiappe passed Al-Hameli heading into lap eight to take sixth, but Torrente became embroiled in a fascinating tussle with the Emirati for his seventh place, as the leaders continued to pull away and Selio held a 4.08-second lead over Roms after 11 laps.

The American sneaked passed Al-Hameli into seventh, when the Emirates Racing Team driver almost blew over turning into a straight, but Selio maintained his lead at quarter distance. Twelve seconds separated the top seven on lap 20, but the race was yellow flagged on lap 24 after a high speed crash between Carella and Roms, when the two collided at a turn buoy and Roms’s Baba barrel-rolled over Carella’s DAC, badly damaging both boats, hospitalising the drivers and forcing both out of the race.

Once the damaged hulls had been removed from the course, racing resumed on lap 38 of 60 and Selio retained his lead. Chiappe found a way past Stark to snatch third place and Torrente followed him through and into fourth on the next lap, as Al-Qamzi slipped to 10th in the second Team Abu Dhabi boat.

With 10 laps to run, Selio led by 2.85 seconds from Andersson, Chiappe, Torrente, Stark and Al-Hameli. The Finn managed to hold on through the closing tours to record his first win of the season and leap into contention for a third world title after the race was yellow flagged again with two laps to go when Ahmed Al-Hameli flipped at speed on the back straight. Chiappe and Torrente benefited from Carella’s unfortunate demise to storm through into first and second in the title race heading to the final three races of the season, as the race finished under the second yellow flag and Al-Qamzi was later disqualified for a course violation.