Erik Stark took his 4th Pole Position of the 2018 season and with Thani Al Qemzi only qualifying 6th and World Championship leader Shaun Torrente missing out on the Q3 Shoot-Out, the Swede heads into Saturday’s Grand Prix of Sharjah – The final race of the season, as the strong favourite to take the Title.

Needing to finish first or second to have any chance of winning his first world title, the Swede claimed pole with a lap of 45.61sec and will have clear water for Saturday’s final race of the season.

Championship leader and team-mate Shaun Torrente was pushed out of the Q3 shoot-out by his team-mate Thani Al-Qemzi in the dying seconds of the session and will start the race from the uncomfortable confines of seventh after complaining that his DAC’s electrics failed leaving him stranded off the course when he needed to post a quick lap.

Al-Qemzi was not able to claim a top three starting position either and will start what is sure to be a pulsating showdown from sixth.

With Ahmed Al-Hameli still recovering from ingesting water during his Abu Dhabi crash last week and Duarte Benavente sidelined with back pain, 17 boats took to the water for Q1 and five would be eliminated.

A photo shoot for the aquabike riders disturbed the water in the opening minutes and Erik Edin was the first to break the 50-second barrier.

The water began to settle and Torrente carded the early target of 48.67sec and the Team Abu Dhabi trio stormed into the top three places and the relative safety of potentially qualifying.

Selio (above) went quickest with a 48.11sec and that was sufficient to win a session where a troubled Cédric Deguisne, Simone Schuft, Sutthipan Sookbuangbon, Grant Trask and three-time World Champion Philippe Chiappe failed to make Q2 and Bartek Marszalek made the cut, although engine issues meant that he missed out on Q2.

Concentration levels were paramount for a crucial second session where none of the 11 survivors wanted to be in the bottom five or ‘on the bubble’ in the dying seconds.

It was critical to post a fast lap early.

Torrente hit the front with a 48.38sec only for Stark to run a 47.21 and top the times with 10 minutes to run. Torrente found himself down in eighth with seven minutes left after useful times by both Carella and Morin upped the pressure on the American. He responded with a 47.34 to leap back into the top six, as Selio topped the times with a 46.89 heading into the last five minutes. Al-Qemzi was now on the bubble himself, as Morin pushed Andersson out of the top six.

With less than three minutes to go Al-Qemzi slipped down to seventh as the pressure intensified and Torrente was pushed down to sixth. 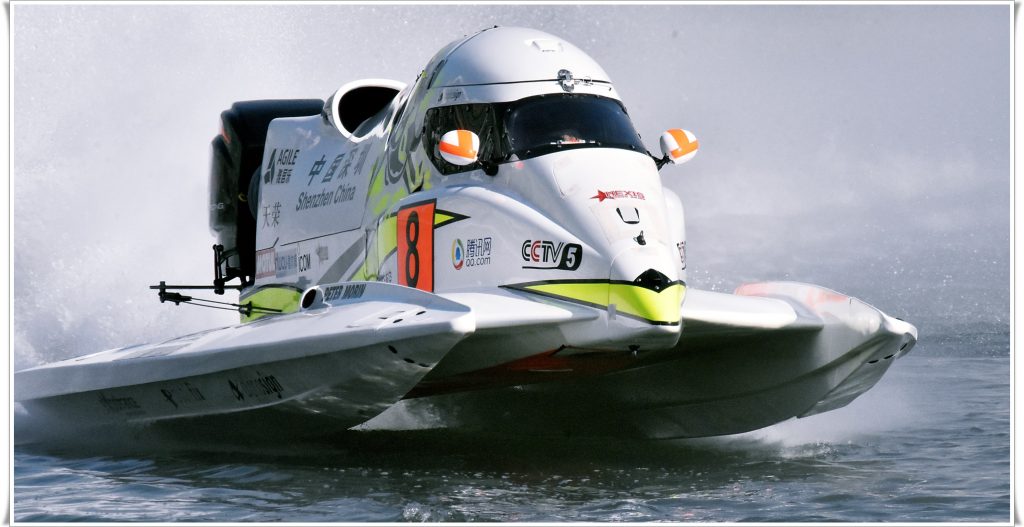 Morin (above) topped the times with a 46.72, as Al-Qemzi missed out on the top six and Torrente nervously sat out the frantic final seconds only to see his team-mate post a 47.13sec and knock the American out id the top six. Marit Strømøy, Francesco Cantando, Filip Roms, Erik Edin and Torrente failed to make the six-boat Q3 shoot-out.

Last year’s pole winner Carella (below) was first out and opened his Q3 account with a 46.63sec and improved with a 46.55.

Al-Qemzi was next out for two of the most important laps of his career and he began with a 46.63 and followed up with a 47.20. It was not enough. Andersson responded with a stunning 45.67sec lap to hit the front and could not improve on his second tour.

Stark was next on the water knowing that he needed to finish in the top two places to stand any realistic chance of winning the title.

The Swede opened up with a 46.01sec to move into second place and followed that with a pole-winning stunner of 45.61sec. A resurgent Selio and Morin stood in the multiple UIM F2 champion’s way and the Finn started out with a run of 46.11 to go third and maintained his position with a 45.79.

Morin stood between Stark and a second pole position in seven days.

The Frenchman slotted into fourth with a 46.22 but was unable to deprive Stark of a vital pole. It set up a fascinating three-way fight for the title on Saturday afternoon.