This weekend is certainly going to be interesting!

At the Salle des Etoiles in Monaco, the UIM are hosting their annual Awards Giving Gala to celebrate last year’s International Champions.

Chris Davies and I will be in the principality to cover the ‘great and good’ from 2016 for Powerboat Racing World.

Meanwhile in Cape Town, South Africa, the first of the 2017 UIM Championships will be held – P750. 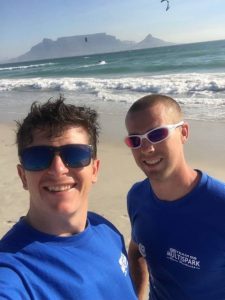 With the first 2 rounds set for this Saturday and Sunday we should have a good indication whether British team’s 33 BrandFuel crewed by Bligh Julius and Charlie Hatfield (left) and Darryn Harrison’s Moku Racing with James Ion are on track for the first UIM World Championship win of the new season.

Julius told me today from Cape Town, ‘I’m feeling and looking good John, Charlie only looks better in the photo due to the ‘selfie stick’.

South African born Brit Harrison was unavailable for comment, although his father Grant, told me, ‘Ag, Izit, we will have a Babelaas after the event’!

In Mumbai, India, the Nexa P1 Powerboat – Indian Grand Prix of the Sea will be competed for.

The Event has already attracted vast media coverage in the Indian press.

John Donnelly, an International Powerboat Celebrity, racer, actor, public speaker, singer and motivational coach was also unavailable for comment today. He had a slight issue with crew mate Kevin (Vin) Burdock last night over who should play the next James Bond.

Summer is approaching and let’s look forward to the new season wherever you are.